How they have affected my life..... 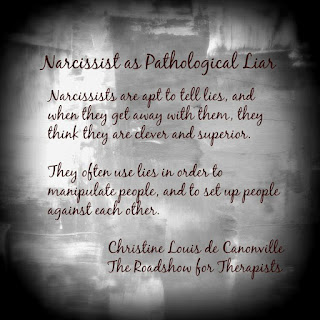 For those who do not know the full depth meaning of a Pathological Liar... A Pathological Liar is someone who compulsively tells lies or fabricates information. They believe the lies they tell others and tell them to provide themselves with attention or personal gain.

To spot a Pathological Liar, look for frequent inconsistencies in their stories and watch for subtle changes in their body language. (Ex: excessive eye contact).

So, like I said before, I have known a few throughout my life. It's been difficult to open up to people as I move on and move to different towns. I feel like as I get closer to certain people, I observe and realize they aren't who they say they are. I am the type of person, when sitting in a crowd of people, will sit and listen to conversations around me and not interact much (which makes me the "shy" one), but I find myself not always listening to enjoy the conversation, but to hear the inconsistencies and pinpoint the lies within the conversation. :(

The reason I have decided to finally speak about Pathological Liars is because I lived with one for my childhood and when he left he never stayed away long enough for me to heal. He used to call them "White Lies", but I knew better at a young age because my mother always taught me that "White Lies" are not meant to hurt, they are meant to hide surprises --> like Christmas Gifts for example. I would catch him in lies then and I still do now. He is no longer apart of me anymore.

I recently met an acquaintance whom I thought I could become very close friends with, but unfortunately the more I got to know them, the more stories I hear, and the more lies I catch them in, the more it drives me further away and less social with them.

No matter how much these people try to hurt me and interfere with my life and family, the more I feel pity for them. They are so far in their lies that they believe their own crap and will do anything to make it true as they see it.

One thing they will never do to me or my family again, is get too close and hurt us. That being said, I will not let them control my life anymore or make me afraid to call them out on their bullshit. The only reason why I have not fully let go of one particular person in my life is because they are associated with people I care about and I worry about the people I care about very much to let them get hurt again.

To anyone who has ever been a victim of Pathological Liars.....Call them out on it....don't let them run you like their lies have been running them!!!